What Shoes to Wear on a Boat: The Guide to Style and Comfort

If you’re looking for fun and exciting pastimes and leisure activities, you may wish to take up boating. For centuries, mankind has been fixated by water.

There’s just something soothing about open water that we just seem to naturally be drawn to. This is why sailing and boating became so enormously popular and it’s what we’re going to be talking to you about today.

Specifically, we’re going to be talking to you about what footwear to wear on a boat. Believe it or not, but the footwear that you wear on a boat will make an enormous difference when it comes to your boating experience, and of course, your overall safety and well-being.

What are boat shoes? 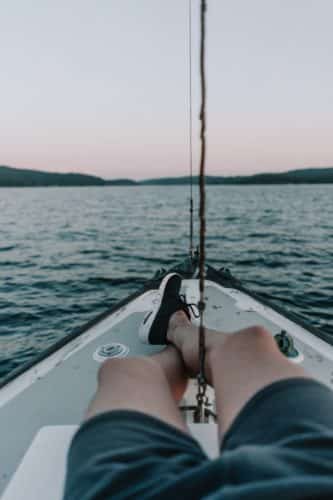 To get the ball rolling today, we’re going to start off by looking at what boat shoes actually are. As you can probably guess, boat shoes are shoes which are designed to be worn on a boat.

Hmm, who knew? Boat shoes may predominantly have been designed to be worn on a boat, but the truth of the matter is that because they’re so stylish and comfortable, a lot of people wear them on dry land.

In fact, boat shoes were considered essential for certain preppy styles and are now considered to be very much a fashion icon.

Boat shoes are designed to help provide superior grip on the slippery, and often wet deck surface of the boats, whilst also helping to keep the feet nice and dry by keeping water out, whilst also adding an element of comfort and style at the same time.

Boat shoes are considered by many to be the ultimate boating accessory, which is why it’s so important for you to choose the right ones.

Don’t worry, though, in this guide today we’re going to help you choose the perfect pair of boating shoes as well as teaching you a little more about these awesome pieces of nautical footwear.

The origins of the boat shoe 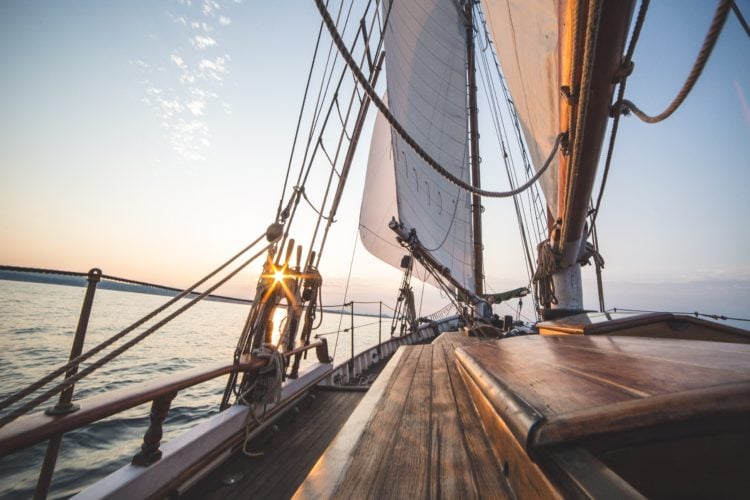 Before we can start looking at choosing the right boating shoes and various other pieces of boating accessories, we’re going to first take you back in time nearly a century, to the year 1935.

As you’ve probably noticed, boating can often get a little wet.

Most decks on ships were made of wood, which would often get very slippery, especially when there was a lot of water involved. This was very dangerous and many a sailor over the years would slip, injure themselves, and break various bones in their bodies as a result of the slippery surfaces.

The slippery surfaces meant that boatmen and sailors would struggle to get any grip or traction, and getting a firm foothold was often near enough impossible.

One day, a man by the name of Paul Sperry, decided that enough was enough. He was sick and tired of slipping over and injuring himself, so he set out to create a shoe that could be worn on boats to offer superior grip and traction.

One day, when he was home and on dry land, Sperry took his dog for a walk. This was a typical Connecticut winter’s day, meaning it was extremely cold. Sperry once again found himself treading gingerly on the ground for fear of slipping over, this time on the ice. Sperry’s dog however, was happily running on the slippery ice with no issues whatsoever. Sperry took note of this and figured that the dog must have special grip on his pads.

When they got home and got nice and warm, Sperry examined his dog’s feet and noticed that the dog’s pads were made up of various cracks and ridges that made a special pattern. The pattern, as we know it today, is known as a herringbone pattern.

Sperry’s lightbulb moment came when he came up with the idea of cutting a similar pattern into the soles of the shoes he wore on the boat. Sperry did precisely that and found that his previously slippery leather boating shoes were now grippier than ever before. Sperry could now hurriedly navigate the deck without fear of slipping over and hurting himself. 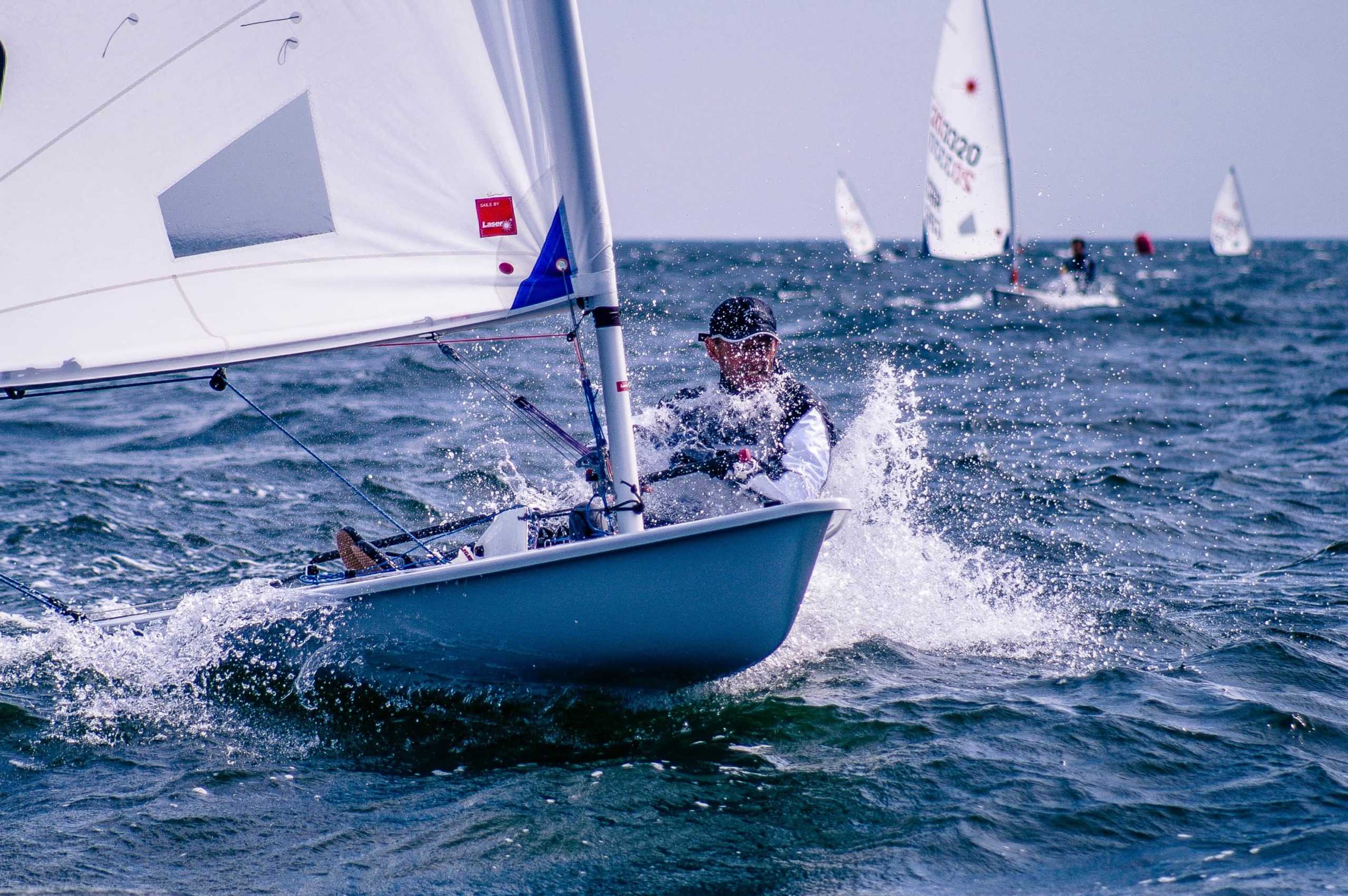 Needless to say, Sperry’s fellow boatmen became eager to enjoy these same levels of grip and traction on the boat’s surface, and so they asked Sperry if he wouldn’t mind customizing their shoes in the same way that he’d customized his own. Needless to say, he was happy to oblige. One of the major downsides to his initial design was the fact that black soled shoes would leave unsightly looking black marks on the surface of the decks.

To get around this problem, he would go on to customize shoes with white soles instead. Keen sailors and boating enthusiasts quickly heard of these wonderful new shoes which offered superior grip and traction, and they wanted in on the action.

Sperry’s boat shoes were very popular in the nautical world, but they remained very much a niche product outside of the world of boating. In the late 30s however, the U.S Navy saw just how valuable these shoes could be and they decided to negotiate a special deal which would see these boating shoes, which were often known as ‘top siders’ being created on a much larger scale.

Sperry received an offer too good to refuse and he sold his business to a rubber-making company who went on to develop ‘Sperry Top-Siders’ throughout all of the United States. Soon, the world would be introduced to the wonder that was the boat shoe. 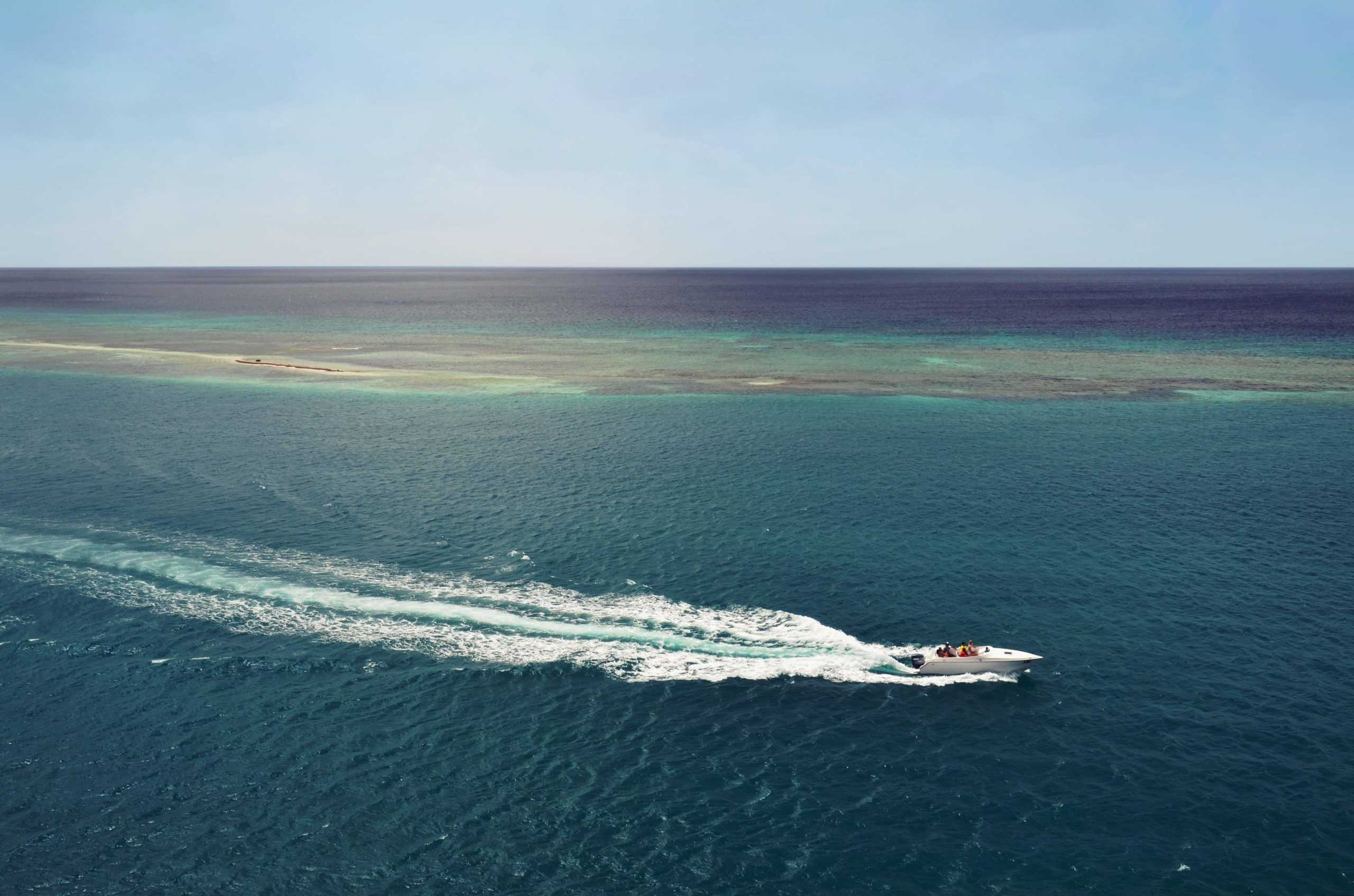 Nowadays, shoes to be worn on boats are a great deal different to the ones that Sperry would modify all those decades ago.

Now, they come complete with unmistakable characteristics and features.

But just what is it about boat shoes that makes them so popular? After all, couldn’t you just wear sneakers on a boat?

Many shoes these days are designed to offer superior grip, so why wear boat shoes or specially created water shoes? Well, actually, there are a few reasons. These include:

First and foremost, one of the most important reasons to wear specialist footwear whilst on a boat is because of the fact that they offer superior levels of safety. The decks of boats are very hard and can get very slippery.

If you slip over on one, if you’re lucky you’ll simply end up with a nasty bruise. In the worst-case scenario, you could break bones, severely injure yourself, or even lose your life in the event of a head injury. Yes, it really is that serious.

The great thing about specially designed shoes made specifically for boats, is the fact that they offer incredible grip and traction on surfaces that would ordinarily be slippery. When you wear these shoes on a boat, you’re consequently far less likely to slip over and sustain an injury, which is precisely what you want.

Another great benefit of water shoes or boat shoes is the fact that many of them are waterproof. If you were to wear sneakers and get them wet, the material would absorb the water and you’d end up with wet feet and wet socks.

This would not be very comfortable at all. Shoes designed to be worn on boats, however, are ideal because of the fact that they’re waterproof. This footwear is made from material which wicks away water rather than absorbing it. That means that even if you do get your feet wet, they won’t stay wet for long and the shoes will quickly dry out.

The third reason why specialist footwear on a boat is always recommended is because of the fact that it will promote functionality. Say for example, you’re carrying something delicate from one end of the boat to the other.

If you were wearing slippery footwear, you’d find yourself walking painfully slowly for fear of slipping and/or dropping the fragile item that you’re carrying.

Not only are these shoes functional, waterproof, and safe, they’re also incredibly stylish. Many boat shoes, deck shoes, water shoes etc, are now designed with style in mind as well as comfort and functionality.

How to choose the right water shoes for boating 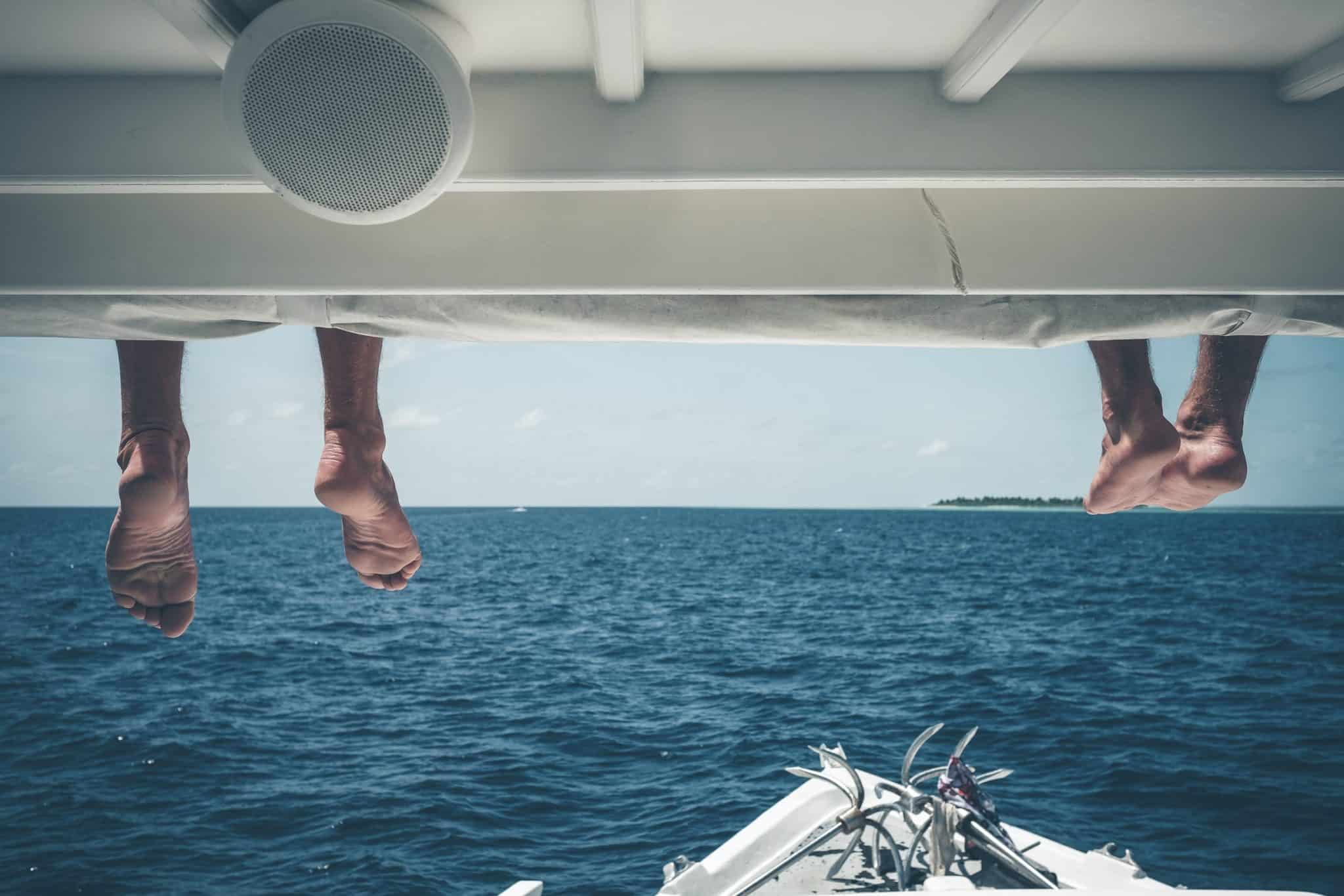 Now it’s time for us to help you choose the perfect footwear for when you’re out on the open waters.

Because water shoes/deck shoes have become so hugely popular in the world of boating, more and more companies are looking to get in on the action.

Unfortunately, this does mean that there are some less than impressive budget products out there which you’ll want to avoid. To help you get the most from your money, here are several tips on choosing the right water shoes for boating.

When it comes to deck shoes, you get what you pay for. To a certain degree at least. If you come across a pair of shoes that are so cheap compared to the others you’ve looked at that they seem too good to be true, they probably are.

Budget shoes are cheap for a reason. The most likely reason is the fact that they’re poorly designed and are made with inferior materials.

Buying cheap deck shoes may seem like a bargain at first, but once you discover that they aren’t as grippy or as comfortable as they should be, you’ll wish you’d spent a little more and gone for a more reputable make.

You needn’t spend a fortune, but don’t look for ridiculously cheap water shoes for boats either, as you will only end up disappointed. 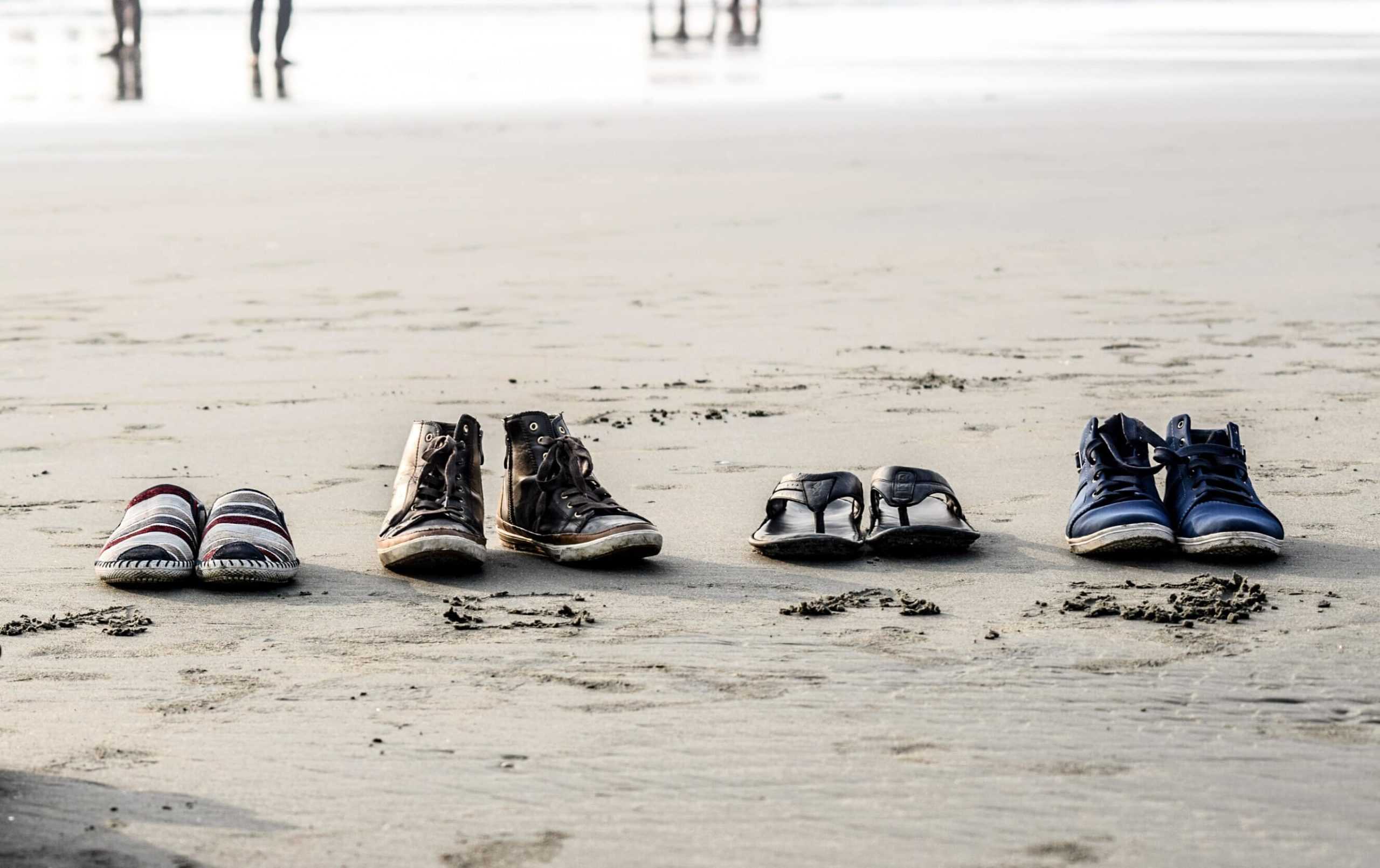 When you choose boating shoes, you need to make sure that you choose shoes made from the right materials.

The materials you want should be water-resistant, durable, hard-wearing, comfortable, and quick drying.

Leather is an option, though this will be expensive and it will require a fair amount of care and maintenance. Materials such as neoprene however, are far more practical, are washing-machine safe, and can be treated roughly.

Be careful of waterproof shoes

Believe it or not, but waterproof shoes are not what you want when it comes to your boating footwear either.

Whilst waterproof footwear would appear to be useful, the main downside is the fact that once the water gets inside the shoe, it won’t be absorbed or drain away, so it’ll be trapped there. Instead, look for water-resistant shoes or shoes with drainage ports for the water to drain straight out of.

Go for a light sole

Remember how Sperry discovered the hard way how dark-soled shoes left unsightly scuff prints on the decks of boats? Yeah, well, nobody wants that, do they? To avoid leaving scuff marks on the deck of the boat you’re using, always look for boat shoes with light coloured soles instead. in fact, if you do come across a “boat shoe” with a black sole, this could be an indication that it’s a cheap and inferior product masquerading as a boat shoe.

When you think of boating, you probably imagine yourself laid on a sun lounger on the deck of a large yacht, kicking back and doing very little.

If you want to do that then that’s great, but a lot of people that have boats also like to engage in adventure sports and activities such as kayaking or sea fishing. Because of this, you want to choose boat shoes that remain firmly and comfortably on your feet. Look for boat shoes with laces or Velcro fasteners, as that way you can fasten them as tightly and as securely as you wish.